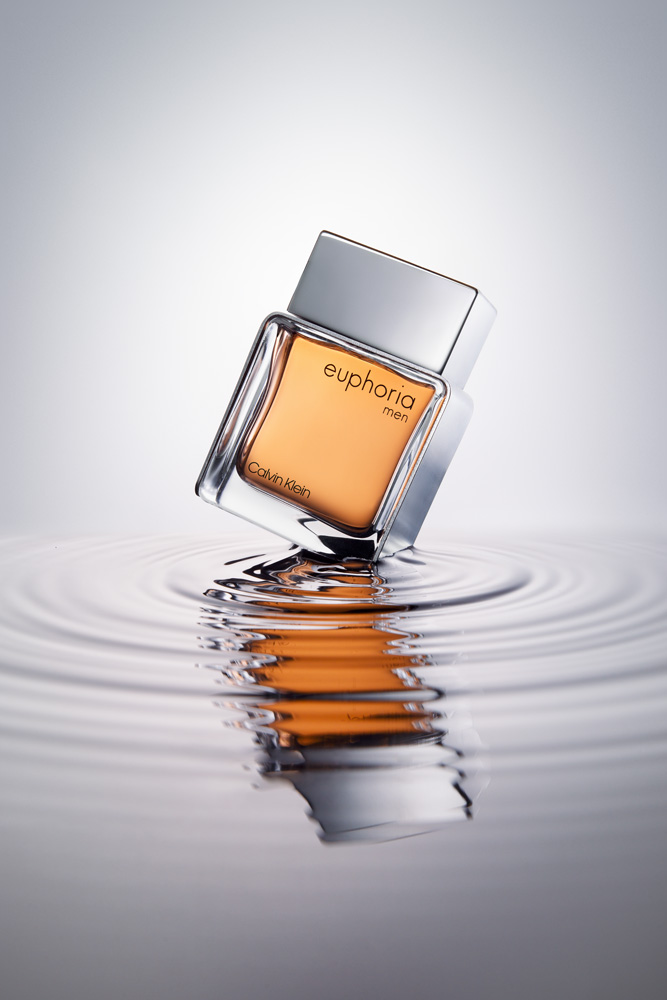 In this article I will try to explain how I made an advertising photo of a perfume bottle. I took the picture some time ago and the only things I had were an idea, a few speedlites and what I had around. Sometimes there is no need to have professional equipment and simple ideas will be enough to get a good result. Taking photograph is half of the way, which is why it is necessary to have retouching skills. Knowledge of such graphics editors as Photoshop is essential, because it is often difficult to create perfect conditions for photographing.

I started by preparing a perfume bottle, emptying it completely and removing an atomizer tube. Then I poured inside water with food coloring and made sure that the shade of the liquid was similar. You can skip these steps if you have an unused perfume bottle. You can retouch the atomizer tube later, but this is not necessary in some compositions. At the back of the perfume bottle cap I glued a rod that was attached to a lightstand. In the middle of the room I put some chairs on which I put a black oven tray and filled it with water to the rim. I placed the perfume bottle in such a way that it lightly touches the water.

BTS (Behind The Scene)

I used four radio-triggered speedlights and three diffusion panels to take photographs. You can use either a diffuser, tracing paper or Savage Translum foil. I placed camera on a tripod and set the parameters to f / 14, 1 / 160s, ISO 400, 50mm. To photograph small objects you need a lens that allows you to approach a small distance of about 40 cm. The speedlites that I used were Canon EX430 II, Metz 52 and 2x Metz 50, set to about 1/4 – 1/2 power. I placed two speedlites with mounted snoots from the front, on the right side I placed the third one with attached stripbox partially covered with a black flag and the fourth speedlite with a stripbox on the back. The bottle was surrounded on three sides with diffusion panels because I wanted to obtain soft light and gradients on glossy surfaces.

To make waves on the water, I just droppped the drops of water near the bottle using a syringe.

There are many ways to retouch unnecessary parts of a photo in Photoshop, but the simplest is to use the Clone Stamp Tool. I had to carefully remove the unnecessary elements such as: rod, drops of water, the edge of the oven tray, etc. The logo of the Calvin Klein brand was printed too low on the bottle, which is why I placed the new one a little higher. At the end I made a color correction and added a vignette on the background.